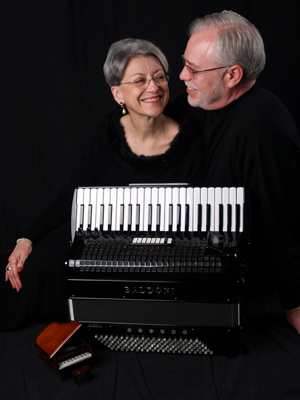 At this point (2018) we have been married forty-eight years. We're often asked what keeps us together: we don't know unless it's likely that there is no one else that would have either of us! It's more likely that we have very common backgrounds, our interests are quite similar, and we just happen to like each other's company... who knows.

Diane was born in a Displaced Persons camp in Munster, West Germany, just after World War II. In 1951, her parents (Lithuanians) immigrated to the United States; of course, Diane came along. Their sponsors to the U.S. lived in Grand Rapids, so that's where they ended up.

When Diane began Kindergarten, her name was (and still is) Danguole, and she didn't speak any English. Since the Kindergarten teacher couldn't pronounce her name (and Steven still can't), she informally became Diane. She moved from grade school, to middle school and finally to high school for grades ten through twelve.

On-the-other-hand, Steven started life in Grand Rapids, MI, son of a first generation Ukrainian father and a Pennsylvania Deutsch mother, living in a three generation house-hold on the west-side. There was nothing particularly spectacular about the young lad, save perhaps, his early love of motorcars and his extensive travels (around the block). Steven didn't have the luxury of a middle school; after sixth grade it was off to high school, which in 1961 was grades seven through twelve. Starting high school in the seventh grade was just like being back in Kindergarten again, except now he was twelve years old.

Our first encounter came in Sophomore year, during a morning choir class. As it happened, Steven, whose voice had just changed, was sitting just behind the alto section, where Diane was occupying a seat in that section's last row. While Diane may claim being tauted like girls, pigtails and ink wells; as Steven remembers, it was more about Russian girls pulling plows: Lithuania was a Soviet Republic at the time. By the end of the Sophomore year, Steven and Diane were an item.

Since Steven and Diane only lived a couple of miles apart, it wasn't unusual to find the two together. A couple of times a week Steven would walk or bicycle over to Diane's house. After all, Steven was the more adventurous of the two, having all that experience driving around the block in his formative years. 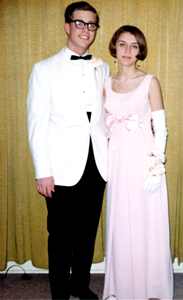 Junior year we were almost inseparable. Since both of us were on a college academic track, we found ourselves together in many classes. Both of us were very involved in music. Towards the end of the Junior year, a situation arose which would pit us against each other for an opportunity for a scholarship to attend Interlochen Music Camp. Ultimately, Steven was afforded the opportunity, which also lead to another scholarship to attend Blue Lake Fine Arts Academy that same summer. It didn't affect the relationship: Steven asked Diane to the Junior prom. And, Diane did attend an honors summer program at Grand Valley State College.

Senior year was essentially more of the same, except we were spending much more time together: Steven's father was threatening to make him pay that phone bill. During the school year Steven worked for the new Chemistry teacher as his lab assistant: this is how we met Bruce Nichols. By the time the Senior prom rolled around, decisions needed to be made regarding where to go to further one's education. Steven's father offered him a piece of luggage and a bus ticket to Detroit: the nearest naval recruiting office. Steven decided that Michigan State University might be a better choice. Diane decided to stay in Grand Rapids to attend Grand Rapids Junior College for two years. By the end of June, Steven was in East Lansing, MI, living in an MSU dormitory.

We did communicate throughout the summer: letters (Diane still has them all), postcards and the occasion phone call. But long distance calling was expensive then so there was very little of that. Steven did manage to make it back to Grand Rapids once that summer. Diane was working as a playground supervisor near her house. When Steven returned and went to visit her at the park, Diane didn't recognize him: he now had a beard!

Diane transferred to MSU after receiving her Associate's degree in Science just in time for Junior year in the same dorm as Steven - but on the other side. In those days the boys and girls were separated. During the school-year Steven started convincing Diane that it was cheaper for two to live together rather than separately. Having already been engaged for almost three years, we decided to get married that summer and live in married housing on campus. 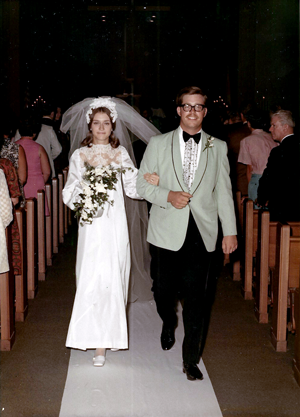 We married on August 28, 1970, with Bruce walking Diane down the aisle since her father had passed away when she was six years old. After a lovely reception at the old Pantlind Hotel (now the Amway Grand Plaza) in Grand Rapids, we then headed off to Halifax, Nova Scotia for a honeymoon and our first experience with lobster and exotic dancers. On the way back to Michigan we stopped in Corning, NY to help Steven's grandparents celebrate their 50th anniversary. Diane was introduced to many new relatives. In another year plus, armed with Bachelor of Science degrees, they both hit the streets, looking for work and a place to live. Married Housing gave them two weeks to get out, and since money was a huge issue back then, Graduate School was out of the picture.

It was tough to find any kind of jobs in 1972, even with college degrees. Diane found it especially difficult since the first question from a potential employer was when was she going to start a family (this was several years before EEOC became serious). Steven found a job teaching high school Physics in Plainwell, MI, but quickly decided that the bureacracy and pay were not for him. Luckily, he had worked for Michigan Bell during the summers and college breaks and still had good contacts, so he returned to Ma Bell and had a very productive and satisfying career in telecommunications.

Meanwhile, Diane initially worked at Stow-Davis Furniture Company, then at Butterworth Hospital in the lab and at two law offices as a para-legal in Grand Rapids. After Steven's transfer to Columbus, OH and promotion to management, Diane also joined Ma Bell when it had to meet an EEO quota for females. She thought there'd be no more discrimination, but she was wrong. It remained a struggle until she retired, as many women are still experiencing inequality in the workplace. But her career in telecommunications was equally satisfying and rewarding as Steven's was.

In 1976 Bruce Nichols called us and asked us if we wanted to join him and Jan for a weekend in Harper's Ferry WV at an MGA car meet. Bruce had had an MGA for several years, and Steven had helped him work on it during visits with them in Bad Axe, MI where he had transferred to head the lab at the local hospital. He was an early member of NAMGAR and thought that we might enjoy the experience. We were game, and the rest is history.